Unannounced visit of CHR Office representatives at the Polish-Belarusian border

On 18 May 2022, Deputy Commissioner for Human Rights Hanna Machińska together with Valeri Vachev and Marcin Sośniak from the Equal Treatment Department of the CHR Office, Marcin Kusy from the National Mechanism for the Prevention of Torture and Maciej Grześkowiak, the Office’s chief coordinator for scientific cooperation conducted an unannounced visit to the Border Guard posts in Białowieża and Czeremcha-Połowce at the Polish-Belarusian border.
The main purpose of visiting the Border Guard post in Białowieża was to verify the allegations contained in a complaint received by the Commissioner from a non-governmental organization. The complaint concerned the fact that some foreign migrants apprehended by the Border Guard after crossing the border at a prohibited place were accommodated in a garage, in conditions far from acceptable standards.
The visit was also a continuation of the activities carried out by the CHR Office on the Polish-Belarusian border since August 2021, i.e. since the beginning of the humanitarian crisis on the border. The crisis, although on a smaller scale, is still lasting. Foreign migrants, including families with children, acting under pressure from Belarusian services still take attempts to cross the Polish-Belarusian border in places not intended for this purpose. The Polish Border Guard usually returns such persons to the Belarusian side of the border, using the procedures introduced into the Polish legislation in August and October 2021, which the Commissioner found to be inconsistent with the national laws and international standards (i.e. the procedure of returning the migrants to the border line, which was introduced by way of amending, in August 2021, the Regulation of the Minister of the Interior and Administration of 13 March 2020 on temporary suspension or restriction of border traffic at certain border crossing points, as well as the procedure of issuing, by Border Guard posts commanders, of orders to leave the territory of the Republic of Poland, which also results in returning foreign citizens to the Belarusian side of the border (the latter procedure was introduced, in October last year, by way of amending the Act on Foreigners of 12 December 2013).

During the visit to the Border Guard post in Białowieża the representatives of the CHR confirmed that foreign migrants were indeed required to stay in a garage. However, as the commanding officer of the post explained, this was only for a short time of waiting for their coronavirus test results (according to the commanding officer, no longer than 15 minutes). The visiting team was unable to verify the information: on the day of the visit, there were no foreigners present at the Border Guard post who could relate to the explanations. However, in the garage, on the concrete floor, there were some old and dirty mattresses, a table, a few chairs and a bowl with water. Outside, close to the door, there were two portable toilets. This equipment suggests that the room could be used in other situations too, for times longer than about twenty minutes. It should be added, however, that during their frequent visits to the Border Guard post in Białowieża, the CHR representatives witnessed several situations when migrants who had been tested for SARS-CoV2 waited for the results in the hall of the main building of the Border Guard, or outside the building if the weather was good. The waiting time indeed was below twenty minutes.
However, regardless of the interpretation of the conditions found, in the opinion of the visiting team it would be unacceptable to place migrants in such conditions for a period longer than the waiting time for the test results. In any case, the standard of the place should necessarily be improved by removing the old mattresses and adding more chairs (or benches). Also, it should not be required to wait for the test results in the garage. Foreigners should be permitted to stay outdoors if they wish, but their movement within the post should be restricted. In very low temperatures, people should not be required to wait in the garage that has no heating.

During the visit to the Border Guard post in Czeremcha-Połowce, the visiting team members were shown the Aliens Registration Centre (there were no people there on the day of the visit), and the Aliens Verification Centre that exists in a former bus terminal building at the border crossing. The Verification Centre is used for foreigners apprehended by the Border Guard after crossing the border illegally, who wait there for the completion of procedures connected with issuing an order to leave the Republic of Poland. According to the Commander of the post, the waiting time is usually up to 3 hours. The conditions at the place are appropriate for its purpose. There is a large waiting room with access to a toilet and a water dispenser. On the day of the visit, there were no foreigners present at the place. 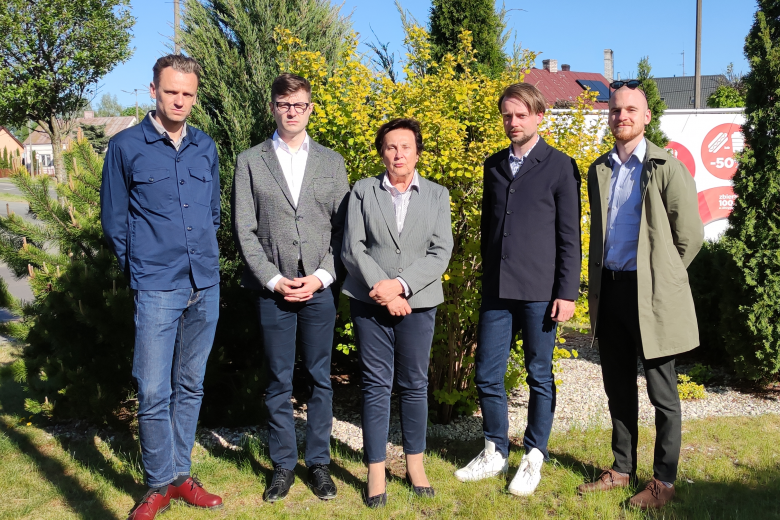