On 10 and 11 March 2022, representatives of the Office of the Commissioner for Human Rights visited: the border crossing points in Krościenko, Korczowa, Medyka and Zosin on the Polish-Ukrainian border; the Border Guard post in Sanok, where an additional second-line border control point operated until recently; and one of the largest reception points near the border, within the premises of a former market hall named Hala Kijowska.
This was a subsequent visit to the border, carried out by a CHR Office team. The previous visits, conducted jointly by the Equal Treatment Department and the National Mechanism for the Prevention of Torture, took place on 25-27 February and on 28 February - 4 March 4 2022.
This time the visiting team included Deputy Commissioner for Human Rights Hanna Machińska, Deputy Director of the Equal Treatment Department Marcin Sośniak, Deputy Director of the National Mechanism for the Prevention of Torture Marcin Kusy, and Director of the Social Projects Centre Barbara Imiołczyk. For the first time, during the visit the CHR Office employees were wearing reflective vests with the Office’s name in Polish, English and Ukrainian.

Since the first day of the Russian Federation’s military aggression on Ukraine, the Polish-Ukrainian border has been crossed by over 1.3 million people - citizens of Ukraine, mostly women with children but also citizens of other countries who lived, worked or studied in Ukraine. In this difficult situation, when in a short time the Polish border is crossed by such a huge number of people who seek shelter and are in need of help, the performance of duties by the Polish border services i.e. the Border Guard and the Customs Service deserves the greatest appreciation.

Current situation at the border crossings

At the visited border crossings, at times of the greatest border traffic officers of the two services checked from 36,000 people (at one of the largest border crossings in Medyka) to 7,500 people (at the relatively small crossing in Krościenko) per day. On the days of the visit, the traffic on the visited section of the border was slightly lower, although in Medyka in one day the border was crossed by 26,000 people.
In order to speed up the border control process and to facilitate the Polish border crossing by people leaving Ukraine, all border crossings got adjusted to pedestrian traffic by allocating to it one or more lanes normally used by cars entering Poland. At the crossings visited by the CHR representatives the border check system was exemplary: passport control and customs clearance went smoothly, and the first-line control usually lasted from one to several minutes. At some crossings, after passing the Ukrainian-side control people immediately moved on to the Polish-side control; at other larger crossings the waiting time did not exceed 30 minutes.
At all the visited border crossings, or in their immediate vicinity, there were heated tents where people crossing the border could warm up and rest before further travel. There were also hot meals and beverages available there, and in-kind assistance e.g. warm clothing. A very good solution, although not used everywhere, was the placement of such tents immediately after to the border line, even before the border control points. This definitely increased the comfort of people waiting to cross the border. A model example is the border crossing point in Krościenko. People walking between the border line and the border check point pass through a line of heated tents where they have access to food products, toys for children and clothes. In some tents, there are also camp beds. The visiting team realize that not everywhere such facilities can be set up because of the existing border crossing infrastructure. However, at all the points space should be organized in the best possible way to ensure comfortable conditions for people crossing the border. It is also important for support personnel (volunteers, Territorial Defence Force staff or Fire Service officers) to have access to all places within the border control points where people are present before and after the border check. As a result, the basic assistance, even such as hot beverages, can reach all those in need.
Such recommendations were provided by the visiting team to the Border Guard officers on the spot.
At each visited border crossing point, medical assistance was available either in the form of a medical aid room (e.g. in Krościenko) or ambulances stationed on the spot. The representatives of the CHR uphold their opinion expressed after the previous visits that permanent presence of medical aid personnel at the border crossing points is needed. At all the points, there were also veterinary medicine points where e.g. animals were vaccinated which was an important form of assistance for people leaving Ukraine with their pets.
Appreciation should also be expressed for Fire Service officers, employees of local government bodies, voivodeship office services, Territorial Defence Forces soldiers, volunteers from non-governmental organizations and other people not associated in such organizations, who provide direct assistance to the foreigners at the border crossing points.
After entering Poland through the visited border crossing points, people were directed to buses or coaches taking them to the nearest reception points. There, basic assistance and temporary accommodation were available before further journey. As the visiting team found out, the Border Guard, in agreement with the voivodeship office services and the police, limited the access to the border crossing points for people who, until recently, would drive in there to pick up their relatives or to offer transport to other people (this is still possible in many places but more rarely). At present, such meetings take place at the reception points, which seems to be a good solution as the crossing points do not remain blocked, and access is unobstructed for ambulances and humanitarian aid.

As established by the visiting team, there seems to be no problem with the so-called second line border control, that was raised by the CHR representatives during the previous visits.
During the previous visits of the CHR Office team at the border crossing points, a large number of foreigners, mostly non-Ukrainian citizens who had no valid identity documents or whose documents raised doubts as to their authenticity, were referred by the Border Guard for additional identity verification. The verification process was usually carried out via diplomatic missions of those persons’ countries of origin. It consisted in examining other documents, if held by the persons in question, or in verifying their verbal statements. The persons waited for such verification in designated places either within the border crossing points (e.g. a designated section of the hall of the border crossing building in Medyka during the first visit of the CHR representatives on 25-27 February) or outside the border crossing points, e.g. at the Border Guard Post in Sanok, in a room allocated for this purpose, or at the Guarded Center for Foreigners in Przemyśl. The verification activities lasted from several hours to several days.
Currently, probably due to a significant decrease in the number of non-Ukrainian citizens crossing the border with Poland, the second-line controls, although they are still carried out, are much shorter, and the foreigners wait for them within the border crossing points, in more comfortable conditions. During the described visit of the CHR Office employees, the second-line control points at the Border Guard Post in Sanok and at the Guarded Centre in Przemyśl were not working.
At the border crossing point in Zosin, during the second-line control the Office employees supported the Border Guard officer in tracing a family, the mother and a sister, of a teenage girl of Roma nationality who was on the border by herself in that difficult situation. Roma organizations also immediately got engaged in tracing the girl’s family members.

Legal basis for the foreigners’ entry to/stay in Poland

During the visit, the CHR Office representatives had some doubt as to the practice of issuing to foreigners - citizens of Ukraine and other countries, permits to enter the territory of Poland for a period of 15 days, pursuant to Article 32(1) of the Act on Foreigners. The provision constitutes the basis for issuing permits to the vast majority of people leaving Ukraine and entering Poland. Until the date of the EU Council’s decision to cover Ukrainian citizens, their family members and certain other groups of aliens (e.g. stateless persons or citizens of other countries who have lived in Ukraine based on permanent residence permits) by temporary protection, the application of the above-mentioned provision was obvious. After the entry into force of the EU Council's decision, one might have doubts as to the need for it, as all persons who meet the criteria set out by the EU Council and who cross the border are covered temporary protection which is a legal basis for their stay in Poland.
It should be stated, however, that the doubt relates only to the interpretation of the provisions and does not affect the actual situation of people entering Poland from Ukraine. It has to be emphasized that all such people are permitted to enter Poland and are provided with the necessary basic assistance.

The reception point within the premises of a market hall named Hala Kijowska in Korczowa seems to be well organized, especially in terms of offering accommodation to those in need. The point offers camp beds within the former exhibition space that has been divided into zones for men, for families, and for mothers with children. Food is also offered (there are several kitchens on the site) as well as possibilities of transport to other parts of the country. Across the facility, there were volunteers present, who had the knowledge of various languages. Thy were wearing specially marked vests. Security was ensured by numerous police patrols. There was also at least one medical aid point.
On the day of the visit by representatives of the CHR the hall, intended for about 2,500 people, was used to approximately fifty percent of the capacity. All the zones were clean and tidy, which is remarkable given the large area and the number of people using the facility. The area around the hall was slightly less tidy as there were piles of clothes, blankets and bedding, covered with plastic sheets. This is certainly a side effect of the enormous scale of assistance that is provided to the people in need. The services responsible for the operation of the reception point definitely do not have any possibility to sort and organize, on an ongoing basis, such large amounts of in-kind assistance that has been offered.
The visiting team also noticed a problem which seems quite significant and consists in insufficient communication between the voivodeship office’s representatives present on the site, and the employees of other authorities, including, for example, the Office for Foreigners. During the visit at the reception point, the representatives of the CHR Office were approached by volunteers helping a person who was interested in fling an application for international protection in Poland. Unfortunately, after a longer while it turned out that at the reception point there were no permanently present employees of the Office for Foreigners (such employees are not entitled to accept applications for international protection but could provide information to interested persons as to where and how such applications may be submitted). There were no permanently present officers of the nearest Border Guard post, either (the border guard post is the entity competent to accept such applications). At the information desk, the staff was unable to provide a telephone number to the representatives of the Office for Foreigners (the representatives were, at that point in time, working at another smaller reception point in Korczowa (at Korczowa 155). Therefore, the operation of the information point in Hala Kijowska should be improved in this regard and all the services and authorities acting in support of the migrants should communicate better. It is also worth considering the permanent presence of representatives of the Office for Foreigners at the large reception point at Hala Kijowska.

The CHR Office employees’ meeting with representatives of the Ukrainian Ombudsman 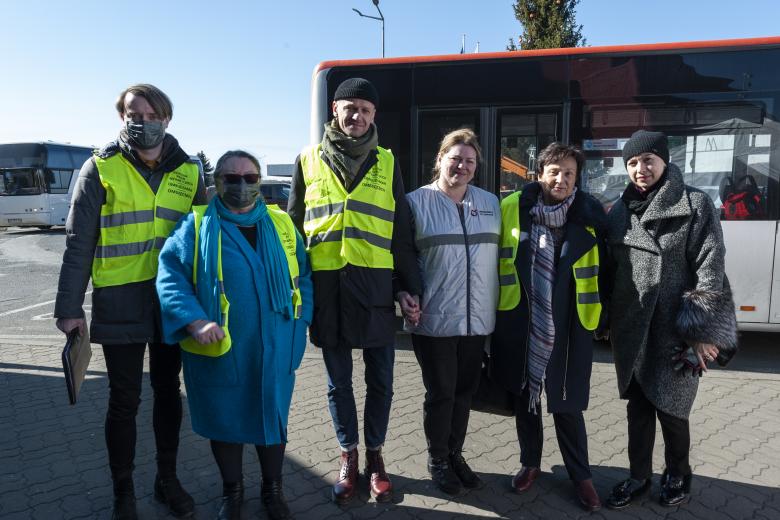 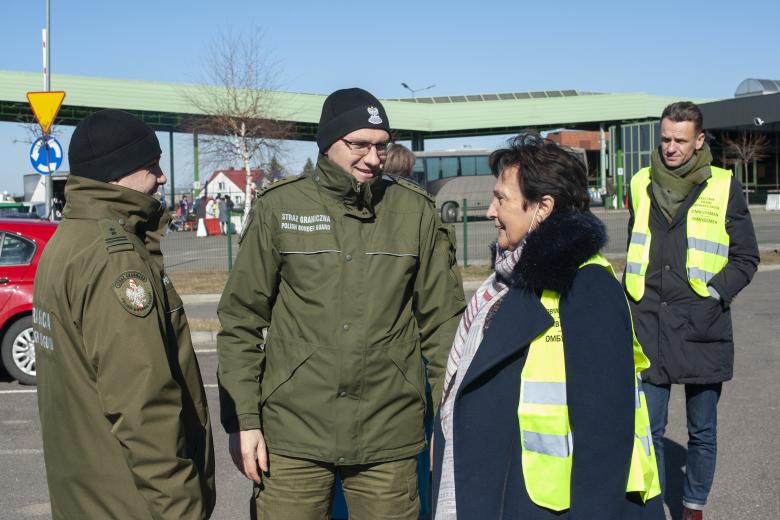