IN HIS OPINION FOR THE SENATE, THE COMMISSIONER FOR HUMAN RIGHTS NEGATIVELY ASSESSES THE TOUGHENING OF THE PENAL CODE PASSED BY THE SEJM ON 16 MAY 2019

The Commissioner for Human Rights Adam Bodnar presented the Senate a lengthy opinion on the package of amendments to the Penal Code and other Acts recently passed by the Sejm [the lower house of the Polish parliament]. They include many controversial solutions that should be analysed by the Senate. According to the Commissioner, not only the provisions contrary to constitutional and international standards should be withdrawn.

According to the Commissioner, making the law more repressive will not help to reduce crime. Criminological doctrine has long taken the view, supported by numerous studies, that effective deterrence stems not from the severity of legal sanctions, but from their inevitability. People are more likely to refrain from committing crimes if the penalties for them are less harsh but harder to avoid than if the punishment is severe but, in the minds of would-be perpetrators, easy to evade.

Tougher criminal laws are also not justified in light of statistics compiled by the police: according to them, the crime rate in Poland has been systematically falling for at least the last 10 years.

Systemic amendments to the general section of the Penal Code will render it more repressive:

EUROPEAN COURT OF HUMAN RIGHTS: LIFE IMPRISONMENT WITHOUT THE POSSIBILITY OF PAROLE IS INHUMAN TREATMENT

In the Commissioner’s judgement, depriving a convict of the possibility of parole as well as extending the period of imprisonment to 35 years before becoming eligible for parole is contrary to the guarantees resulting from Article 3 of the European Convention on Human Rights and Article 30 of the Polish Constitution in connection with Article 40 of the Constitution. This is because such a penalty eliminates all hope and renders pointless any efforts to socially rehabilitate and educate the convict.

Moreover, this solution is inconsistent with international standards, in particular the case-law of the European Court of Human Rights. The ECHR ruled, for instance, in the cases of Vinter et al. vs. Great Britain (9 July 2013), Öcalan vs. Turkey (18 February 2014) and László Magyar vs. Hungary (20 May 2014) that the penalty of life imprisonment without the possibility of parole constitutes inhuman and degrading treatment, thus violates Article 3 of the European Convention on Human Rights.

Furthermore, the ECoHR has ruled that the President’s right of pardon does not constitute a sufficient guarantee of the consistency of the aforementioned penal provisions with Article 3 of the Convention – because the mere existence of the President’s power to grant pardons does not offset the reservations presented above.

Amendments were adopted that restrict the judicial latitude in sentencing. Currently, Article 10(2) of the Penal Code permits a minor over age 15 to be tried as an adult for an enumerated list of prohibited acts. The new provisions indicate cases in which doing so would be mandatory. Yet the a priori specification of situations when a minor can be held responsible as an adult appears to be extremely difficult, even impossible, because each case depends on the degree of maturity, intellectual development and environment of the defendant.

Introduction into the Penal Code of a sample list of mitigating and aggravating circumstances could lead to their automatic application and discourage law enforcement agencies from looking for other circumstances not included in this catalogue which could influence how the defendant is judged.

The range of offenses in respect to which courts could refrain from imposing prison and elect to apply a non-custodial penalty has been restricted.

The option of applying extraordinary mitigation of punishment has been rendered solely dependent on the actions of the prosecutor (a judge may no longer apply this option without a request to do so from the prosecutor, which will be binding). This provision transfers to the prosecutor, inter alia, the decision as to whether the court can apply the so-called “minor state’s witness” institution, which clearly contradicts the principle of the division of power laid out in Article 10(1) of the Constitution in conjunction with Article 175(1) and Article 173.

Provisions relating to aggregate sentences have been amended so that such sentences must always be greater than the most severe of the component penalties. The current mechanism for specifying the penalties subject to aggregation, which went into effect in 2015, has been simplified and has rendered penalty aggregation inflexible. No arguments justifying these changes were included in the legislation.

EXPANSION OF PENALTIES FOR DEFAMATION – ARTICLE 212 OF THE PENAL CODE

The package of amendments introduces a new form of the crime of defamation (libel): all actions taken to lend credibility to false accusations against someone shall be punishable. This new provision, Article 212(2a) of the Penal Code, stipulates the penalty of a fine, restriction of liberty or up to one year imprisonment for “whoever, for the purpose of perpetrating the crime specified in (1) or subsequent to its perpetration, creates false evidence to confirm a false accusation or induces other persons to confirm the circumstances of the accusation’s content". This provision will apply to defamation not perpetrated with the help of the mass media.

As a result of this amendment, an attempt to lend credibility to a false accusation will be punished more severely than the false accusation itself (which is punishable by a fine and restriction of liberty). Defamation itself, under Article 212(1) of the Penal Code, remains an offense that requires a private complaint to be prosecuted, yet the related offense under Article 212(2a) will be prosecuted ex officio. This could result, paradoxically, in an instance of defamation not being prosecuted (e.g. when the victim does not wish to lodge a complaint) while efforts made to back it up are prosecuted.

The CHR believes there is no need for this new provision, because existing regulations already protect the justice system against unlawful attempts to influence its functioning.

“The risk thus exists that this provision will become a tool serving to induce a chilling effect and restrictions on freedom of speech. That’s because this provision – taking into account the politicization of the prosecutor’s office – could constitute a tool to exert pressure on inconvenient journalists and activists, striking at media pluralism and shutting the mouths of political opponents,” Adam Bodnar emphasized.

It is also feared that this provision could apply to the authors of online memes. Moreover, merely repeating inconvenient information in a different medium without checking its veracity could be deemed by law enforcement agencies the crime of creating false evidence. This is possible in the context of the very common practice of reposting unverified information by internet users.

Furthermore, this provision discourages the lodging of private accusations in the case of false evidence creation or defamation and shifting the burden of establishing facts and conducting preparatory proceedings onto law enforcement agencies. It could also be used to bog down inconvenient journalists in exhausting trials that drag on for years.

In the CHR’s assessment, there is no justification for shaping criminal liability in this manner. Experts in legal doctrine have long called for repeal of Article 212 of the Penal Code and leaving liability for defamation solely within the realm of civil law. The Commissioner has also advocated this position; similar views were also expressed during a debate held on the subject of Article 212 in the Office of the Commissioner of Human Rights on 5 March 2019.

“To recapitulate, it needs to be stated that the Act of 16 May 2019 on amending the Penal Code Act and certain other Acts contains a number of solutions that raise legitimate concerns. Thus, it should be the subject of in-depth analysis by the Senate of the Republic of Poland for, among other reasons, the purpose of removing solutions that contradict not only Constitutional standards, but also international standards binding Poland,” Adam Bodnar wrote.

It’s important to note that many of the proposed amendments were not justified by any legal reasoning or supported by any research findings. New prohibited acts were introduced into the Penal Code during legislative proceedings in the Sejm that lasted only 2 days. It seems that the brevity of this period, the absence of reasons given for the aforementioned amendments, the lack of time devoted to formulating reasonable solutions in this area and the absence of social debate force a critical view of them. All these points lead to the conclusion that the Act on amending the Penal Code Act and certain other Acts passed by the Sejm on 16 May 2019 warrants a negative assessment. 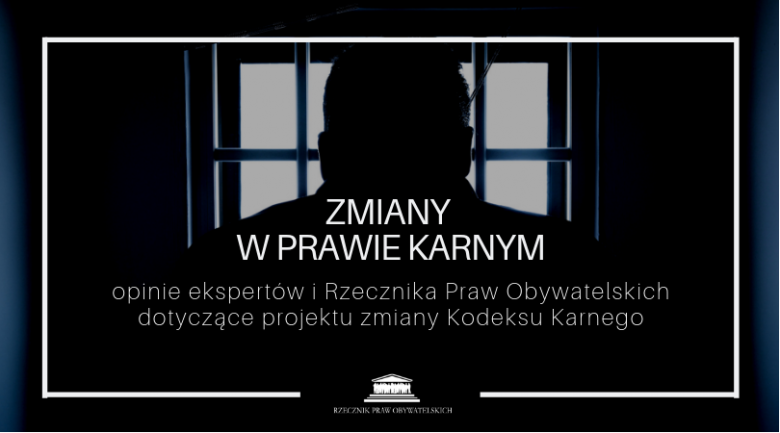